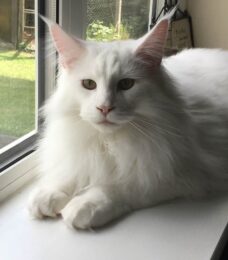 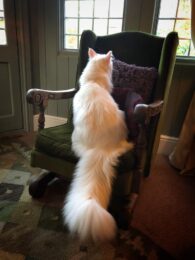 The Maine Coon, also known as American Longhair, is a breed of domestic cat with a distinctive physical appearance and valuable hunting skills. It is one of the oldest natural breeds in North America, specifically native to the state of Maine, where it is the official state cat.

Although the Maine Coon’s exact origins and date of introduction to the United States are unknown, many theories have been proposed. The breed was popular in cat shows in the late 19th century, but its existence became threatened when long-haired breeds from overseas were introduced in the early 20th century.

The Maine Coon is now one of the most popular cat breeds in the world.

The breed can be seen in a variety of colors and is known for its intelligence and gentle personality.

The ancestral origins of the Maine Coon are unknown. There are only theories and folk tales. One such folk tale involves Marie Antoinette, the Queen of France, who was executed in 1793. The story goes that before her death, Antoinette attempted to escape France with the help of Captain Samuel Clough. She loaded Clough’s ship with her most prized possessions, including six of her favorite Turkish Angora cats. Although she did not make it to the United States, her pets safely reached the shores of Wiscasset, Maine, where they bred with other short-haired breeds and evolved into the modern breed of the Maine Coon.

Another folk tale involves Captain Charles Coon, an English seafarer who kept long-haired cats aboard his ships. Whenever Coon’s ship would anchor in New England ports, the felines would exit the ship and mate with the local feral cat population. When long-haired kittens began appearing in the litters of the local cat population, they were referred to as one of “Coon’s cats.”

A myth which is trait-based, though genetically impossible, is the idea that the modern Maine Coon descended from ancestors of semi-feral domestic cats and raccoons. This myth would account for the common color of the breed (brown tabby) and its bushy tail. Another idea is that the Maine Coon originated between the matings of domestic cats and wild bobcats, which could explain the tufts of hairs that are so commonly seen on the tips of the ears.

The generally-accepted theory among breeders is that the Maine Coon is descended from the pairings of local short-haired domestic cats and long-haired breeds brought overseas by English seafarers (possibly by Captain Charles Coon) or 11th-century Vikings. The connection to the Vikings is seen in the strong resemblance of the Maine Coon to the Norwegian Forest Cat, another breed that is said to be a descendant of cats that traveled with the Vikings.

To view our Kitten for sale please see the Kittens page.

This website uses cookies to improve your experience while you navigate through the website. Out of these, the cookies that are categorized as necessary are stored on your browser as they are essential for the working of basic functionalities of the website. We also use third-party cookies that help us analyze and understand how you use this website. These cookies will be stored in your browser only with your consent. You also have the option to opt-out of these cookies. But opting out of some of these cookies may affect your browsing experience.
Necessary Always Enabled
Necessary cookies are absolutely essential for the website to function properly. This category only includes cookies that ensures basic functionalities and security features of the website. These cookies do not store any personal information.
Non-necessary
Any cookies that may not be particularly necessary for the website to function and is used specifically to collect user personal data via analytics, ads, other embedded contents are termed as non-necessary cookies. It is mandatory to procure user consent prior to running these cookies on your website.
SAVE & ACCEPT